DUBLIN, IRELAND – AUGUST 25: Pope Francis arrives to meet the President of Ireland Michael D. Higgins and his wife Sabina Coyne at Aras an Uachtarain on August 25, 2018 in Dublin, Ireland. Pope Francis is the 266th Catholic Pope and current sovereign of the Vatican. His visit, the first by a Pope since John Paul II’s in 1979, is expected to attract hundreds of thousands of Catholics to a series of events in Dublin and Knock. During his visit he will have private meetings with victims of sexual abuse by Catholic clergy. (Photo by Matt Cardy/Getty Images)

In continuing to oppose women’s ordination the pope argues that something has to be revealed in order for it to be done; but that we don’t do it so it must not have been revealed. A cursory examination of change on Catholic views of the death penalty and usury make quick mincemeat of that argument. Revelation provides direction toward increased justice; it’s not a checklist of historical givens. Read More

Originally published by Voices of Faith

Mary McAleese grew up the eldest of nine children in a tumultuous time in Northern Ireland. Her family was forced to leave the area by Loyalists when The Troubles broke out. She was the first Irish President to come from Northern Ireland and the first woman to succeed another woman as the eighth President of Ireland from 1997 – 2011.

His Mema, Denise Donato, had just been ordained the first female bishop in the Ecumenical Catholic Communion (ECC). Psalm 82 speaks about wisdom coming “from out of the mouths of babes.” One day Miles will learn that his sweet farewell was also a revolutionary statement. – Read full article 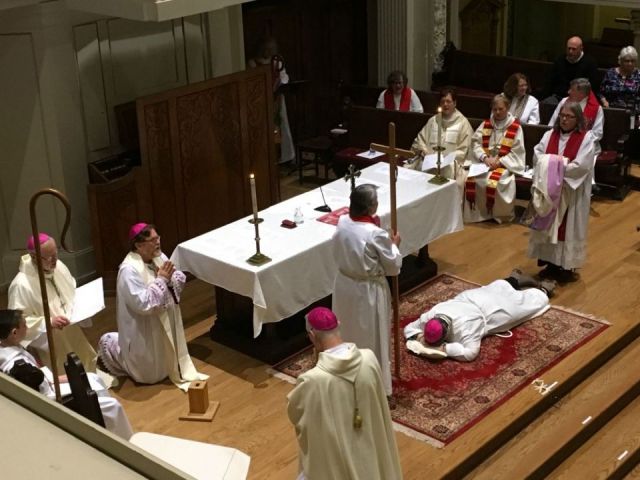 From left to right, Bishops Raphael Adams, Peter Hickman and Francis Krebs pray the litany of the saints with the community during the prayer over Denise Donato, who lies prostrate for her ordination as bishop in the Ecumenical Catholic Communion church. (NCR photo/Jamie Manson)

MeToo and the maleness of God

The door into the old boys club, through which only whispers emerged about the abusive gender relations that were tolerated within, has been unlocked and flung wide open.

The assumed privileges of mostly white men which has allowed society to turn a blind eye to various levels of molestation of women, children and LGBTQ people, has been revealed for what it is in the light of day: an abuse of power which leads to violence. And in a perverse way, the vulgar and demeaning statements of from the President of the United States have unmasked the ugly face of the system that put him there in the first place and continues to maintain him in power. 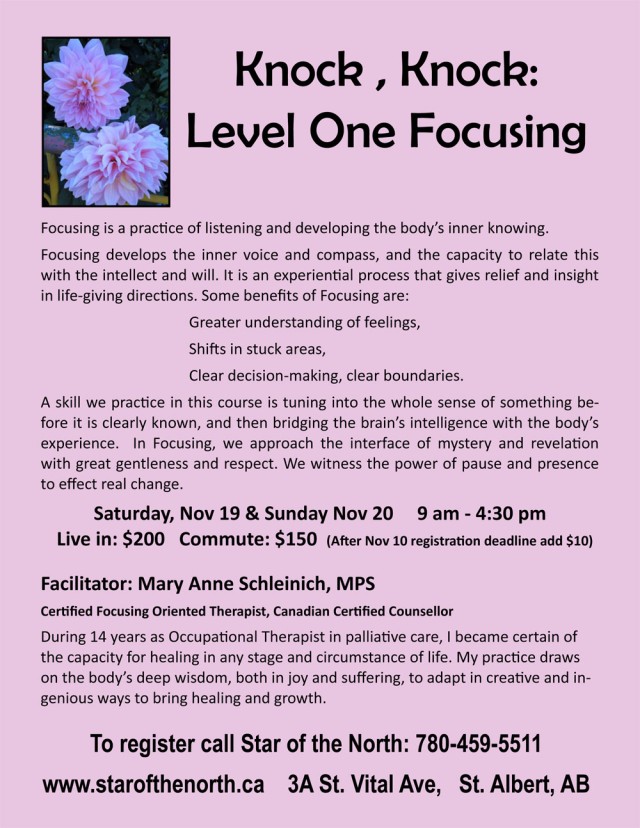 Roy Bourgeois joined us in Calgary, Alberta, Canada for a special talk about Women’s Ordination, The School of the America’s and LGBT Equality.

Posted in Uncategorized | Comments Off on The Sacred Struggle for Peace, Justice & Equality

FOR THIS MONTH ONLY, MASS WILL BE ON THIS THIRD SUNDAY OF THE MONTH
Guest priest Roy Bourgeois, who was dismissed from his order for his support of women priests, will be visiting us (from Georgia), saying mass with Monica and giving a talk in the afternoon.  There will also be a public talk in the evening, 7 p.m., at Southwood United Church (see poster).

[In October, we will resume our second Sunday of the month schedule, which will be the Thanksgiving weekend, Oct. 9.]
Posted in Uncategorized | Comments Off on Roy Bourgeois Visit and Presentation 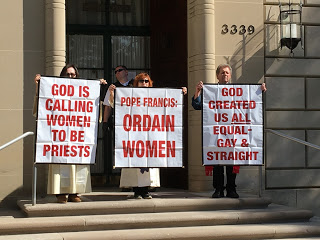 From 2002 through 2016, the Vatican has condemned the ordination of women priests. Since the ordination of  “The Danube Seven” in 2002, the Vatican has tried a number of strategies to quash our movement: excommunication, silencing, shunning, firing and ignoring. Now ten years since the first U.S. ordinations on the boat in Pittsburgh, the door has been opened for the first time. During Holy Week, March 24, the feast day of Oscar Romero, in the era of Pope Francis and his Year of Mercy, a conversation — turbulent at first — began.

Outside the Vatican Embassy on Massachusetts Avenue in Washington, D.C. on Holy Thursday, March 24th the three of us — two women priests – Jane Via and Janice Sevre-Duszynska, and one excommunicated male priest –Roy Bourgeois — washed the feet of supporters on the sidewalk in front of the embassy as cars and buses passed on the busy road.

We prayed and shared our statement of purpose to Pope Francis and the Catholic Church calling for the full and equal inclusion of women and GLBT people.  We read from Scripture, and prayed again this time that church leaders would remember Jesus’ teaching to be servant leaders and love all disciples as Jesus had. We thanked those who gathered with us, re-read our statement of purpose lifted up our signs, and – still in albs and stoles – stepped onto Vatican property and walked toward the door. We had no idea how our action would play out.
Read more

Fundraising efforts continue for Roy Bourgeois’ visit to Calgary in September. Thank you to our coordinating team for organizing the fundraising and everything else for Roy’s visit (Dave, Mary, Pat, Rock and Suzanne)!  The bake sale and Baileys were a tremendous success at the March mass — deliciousness all ’round!

Coming up at the April mass:

For the Bring and Buy:
Items to consider bringing: knickknacks, books, jewellery, and other small household items. We’ll set up tables at the back of the hall to display things. (We don’t have any storage space, so if any items don’t sell, please be prepared to take them home with you; I will also bring a box to collect things for donation to Good Will, for those who prefer not to take things home.) We’ll set up before mass, so if you are bringing items to donate to the sale please come around 9 a.m. to place them on the table (with a suggested donation price attached, if you wish). Hopefully we’ll be set up for purchases by 9:15 or so (it’s just meant to be a casual and fun setting). We’ve done this kind of fundraising sale in the past for other out of town guests of honour, and it’s always been an enjoyable social time. (If you have a bigger item at your house, you might bring a photo of it to display and offer it for sale that way.)

In May, we are going to have a special basket for raffle (details to follow in a coming newsletter) and in June we may have another Bring and Buy if it goes well this month, or we may come up with another idea entirely – stay tuned!

GENNY IS BACK FROM OXFORD (England)!

A special invitation to the community from Leslie Robinson and Jane Oxenbury:

GENNY IS BACK FROM OXFORD (England)!

You are invited to hear about Genevieve Kilburn-Smith’s recent trip to Oxford to read her essay about the history of clerical celibacy and its effect on the church and the role of women in it.  Please come to an informal potluck to hear about her trip and to ask the questions you most want to ask.  Genny’s essay is provocative, scholarly, and brings forward many controversial issues worth exploring.

From Genny and Monica:
We would like to thank the community for your enthusiasm, generosity and support for Genny in her journey to Oxford to present her paper and be at the awards ceremony on Sept 18. It means so much to both of us!

Posted in Uncategorized | Tagged Essay, Genny is back, History of Clerical Celibacy, Oxford, Role of Women in Church, Special Invitation | Comments Off on GENNY IS BACK FROM OXFORD (England)!
Saint Brigid of Kildare Catholic Community
Loading Comments...
Comment
×