This is the story of our Mothers and Grandmothers who lived only 90 years ago. 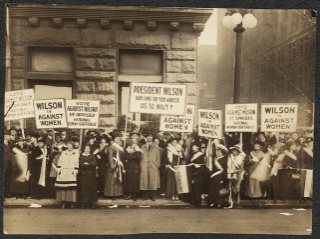 Remember, it was not until 1920 that women were granted the right to go to the polls and vote in the US. 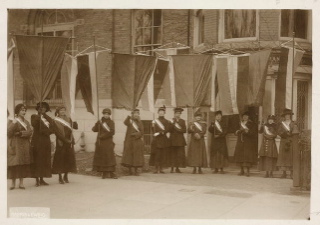 The women were innocent and defenseless, but they were jailed nonetheless for picketing the White House, carrying signs asking for the vote. 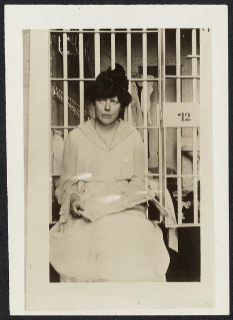 (Lucy Burns)
They beat Lucy Burns, chained her hands to the cell bars above her head and left her hanging for the night, bleeding and gasping for air. 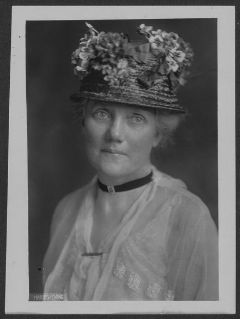 (Dora Lewis)
They hurled Dora Lewis into a dark cell, smashed her head against an iron bed and knocked her out cold. Her cell mate, Alice Cosu, thought Lewis was dead and suffered a heart attack. Additional affidavits describe the guards grabbing, dragging, beating, choking, slamming, pinching, twisting and kicking the women.

Thus unfolded the ‘Night of Terror’ on Nov. 15, 1917, when the warden at the Occoquan Workhouse in Virginia ordered his guards to teach a lesson to the suffragists imprisoned there because they dared to picket Woodrow Wilson’s White House for the right to vote. For weeks, the women’s only water came from an open pail. Their food–all of it colorless slop–was infested with worms. 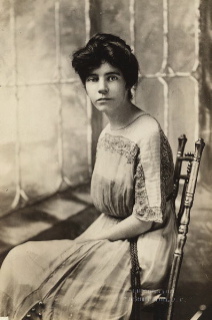 (Alice Paul)
When one of the leaders, Alice Paul, embarked on a hunger strike, they tied her to a chair, forced a tube down her throat and poured liquid into her until she vomited. She was tortured like this for weeks until word was smuggled out to the press. 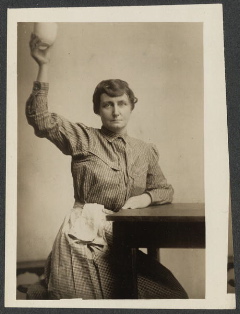 Mrs Pauline Adams in the prison garb she wore while serving a 60 day sentence.
Last week, I went to a sparsely attended screening of HBO’s movie ‘Iron Jawed Angels.’ It is a graphic depiction of the battle these women waged so that I could pull the curtain at the polling booth and have my say. I am ashamed to say I needed the reminder. 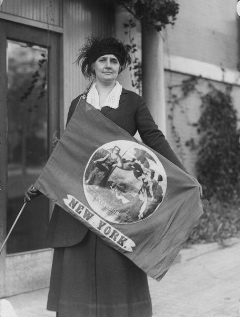 Miss Edith Ainge, of Jamestown , New York
All these years later, voter registration is still my passion. But the actual act of voting had become less personal for me, more rote. Frankly, voting often felt more like an obligation than a privilege. Sometimes it was inconvenient. 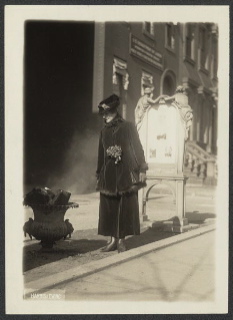 (Berthe Arnold, CSU graduate)
My friend Wendy, who is my age and studied women’s history, saw the HBO movie, too. When she stopped by my desk to talk about it, she looked angry. She was–with herself. ‘One thought kept coming back to me as I watched that movie,’ she said. ‘What would those women think of the way I use, or don’t use, my right to vote? All of us take it for granted now, not just younger women, but those of us who did seek to learn.’ The right to vote, she said, had become valuable to her ‘all over again.’

HBO released the movie on video and DVD . I wish all history, social studies and government teachers would include the movie in their curriculum I want it shown on Bunco/Bingo night, too, and anywhere else women gather. I realize this isn’t our usual idea of socializing, but we are not voting in the numbers that we should be, and I think a little shock therapy is in order. 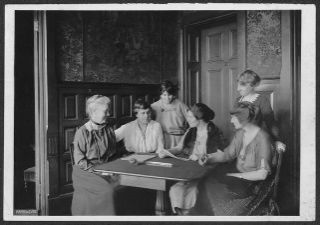 On January 12, 1915, a suffrage bill was brought before the House of Representatives but was defeated by a vote of 204 to 174. Another bill was brought before the House on January 10, 1918. On the evening before, President Wilson (A Democrat) made a strong and widely published appeal to the House to pass the bill. It was passed by two-thirds of the House, with only one vote to spare. The vote was then carried into the Senate. Again President Wilson made an appeal, but on September 30, 1918, the amendment fell two votes short of passage.  On February 10, 1919, it was again voted upon, and then it was lost by only one vote.

There was considerable anxiety among politicians of both parties to have the amendment passed and made effective before the general elections of 1920, so President Wilson called a special session of Congress, and a bill, introducing the amendment, was brought before the House again. On May 21, 1919, it was passed, 42 votes more than necessary being obtained. On June 4, 1919, it was brought before the Senate, and after a long discussion it was passed, with 56 ayes and 25 nays. Within a few days, Illinois, Wisconsin, and Michigan ratified the amendment, their legislatures being then in session. Other states followed suit at a regular pace, until the amendment had been ratified by 35 of the necessary 36 state legislatures. After Washington on March 22, 1920, ratification languished for months. Finally, on August 18, 1920,Tennessee narrowly ratified the Nineteenth Amendment, making it the law throughout the United States.[62]

Nearly twenty years later Maryland ratified the amendment in 1941. After another ten years, in 1952, Virginia ratified the nineteenth amendment, followed by Alabama in 1953.[63] After another 16 years Florida and South Carolina passed the necessary votes to ratify in 1969, followed two years later by Georgia[64] and Louisiana in 1970[65] in 1971.  Mississippi did not ratify the nineteenth amendment until 1984, sixty four years after the law was enacted nationally.[66]

Please, if you are so inclined, pass this on to all the women you know. We need to get out and vote and use this right that was fought so hard for by these very courageous women. 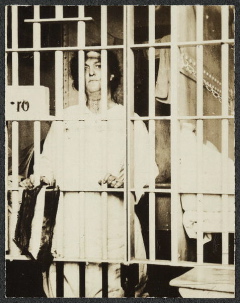 Some women won’t vote this year because….?

Saint Brigid of Kildare Catholic Faith Community Society of Calgary is a place of welcome, joy, support, exploration and love for those who desire to participate in the growth and renewal of the Roman Catholic church.
View all posts by Saint Brigid's →
This entry was posted in Article. Bookmark the permalink.
%d bloggers like this: